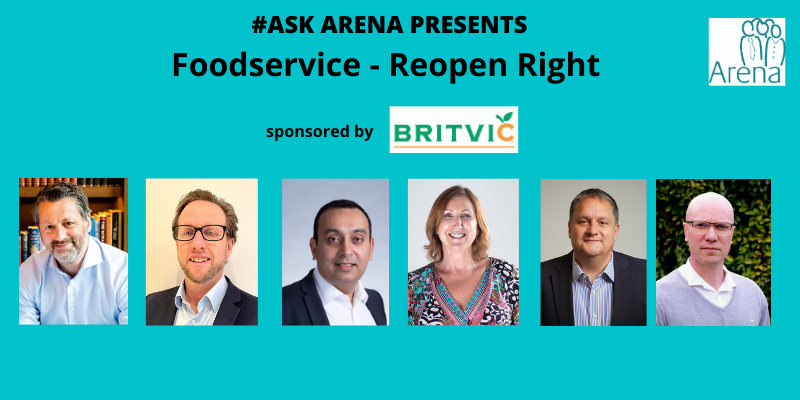 When it comes to working out what catering might look like in the workplace for the next while it seems to be down to a mixture of surveys, nervous wishful thinking and wild guesses.

So, in a recent Webinar kindly organised by Arena - the foodservice and hospitality networking organisation (with panel members including those from Aramark, CH&Co, ISS, etc) I was expecting to see at least one or two crystal balls on display.

However, it was far more thought through than that...even though it was pretty much accepted that the answer to it all remains far from clear. Allister Richards (CH&Co) summing up the situation: ‘the ability to forecast is compromised, constantly changing’, with Hamish Cook (ISS) commenting on the ‘social hesitancy’ still at large.

Thankfully, the webinar was far from a hand-wringing exercise for all concerned. Yes, there was a need to confront the levels of productivity and energy which had diminished in catering teams but each of the speakers were looking at the change of behaviour in the workforce (alongside the new expectations due to Covid sensitivity) as issues to be dealt with rather than barriers to prevent them moving forward. In that regard, Jean Pierre Kloppers comment, ‘If you can’t fix it, feature it’ was certainly the comment which, I imagine, had those listening-in nodding in agreement with...and then wondering exactly what that might look like!!

But what does that mean then? What needs fixed and how can it be featured?

Rajat Chawla (Aramark) spoke of the flexibility required for any return - flexibility, with safety and confidence (for customers as well as the catering team) and interestingly (justifiably!) was looking for the employers to support the caterers and to see the value that having quality food service brings to the workplace.

Allister Richards sees one of the main issues is dealing with the ‘new rituals’ which are being established. He spoke of CH&Co’s approach in segmenting the workforce, taking into account those who are ‘in’ 5 days a week through to those who are remote workers. That pattern has always with us of course, it’s just that the Covid restrictions have increased and legitimized this new ritual. But how can these kitchens cope with a fluctuating workforce, with unknown requirements from day to day? Perhaps this is where that support from employers needs to come into play.

Which brings us back to these fixes being featured?

Firstly, the creative side of things. New offers to address the irregularity of team meetings which may be ‘treat’ focussed. As Richards put it, ‘people have missed being served’ and can be reminded that it’s now possible to get a bit of banana loaf that they haven’t had to make themselves and which has actually risen. (Harsh, but true!). Creativity is required too in what can be offered to those who are in the office and those who are at home. (A recent survey showed that around half of companies wouldn’t use food as a perk because those staff at home might be missing out. Can this be overcome?)

Secondly, there was the practical side of things. If the issue is half the team are at their desks while the others are in the meeting room then where is the caterer who is going to shout about how they can deal with this? Because if they can deal with it, that really is a feature! And all this to be done with ‘frictionless engagement’. Spoonfed’s decision to increase their Development Team to focus on these areas has already brought the solutions that many have adopted in order to adapt over the last year. We only see that as something which will increase.

What I took away from the webinar is that having the most creative of menus, set up for treats at the staff meetings, is only half the story. Even making sure that all is as it should be in terms of safety, and the confidence which that brings, is not answering the issue completely. Comprehensive functionality for online menus which can be set to react to the numbers in the offices throughout the week is going to be key. We already work with teams where the ability to make live changes to menus allows them to avoid crippling losses through wastage while still maintaining an excellent service. This complete management of the ordering process is also tackling the issue of understaffing or overstaffing in the kitchen teams.

Clearly, the world of Click & Collect is here to stay...what was already popular has snowballed as individuals now expect to be able to pre-order and pay with ease. But that’s not the whole picture by any manner of means. Listening to Rajat Chawla speak about what he was tracking globally resonated - we are seeing those in the US, where the workforce is back, enjoying times to collaborate and chat once more - and the caterers who can use the technology to respond to this are doing well. For the UK, meeting with five friends outdoors will soon become ten and in a short time we will plan to bring it all inside - this is the opportunity for caterers to use the right digital solutions to be part of that surge as the workforce embrace the opportunity to socialise again and the team ‘treats’ are part of the weekly routine.

As I said, I really appreciated the distinct lack of hand-wringing in this webinar - the positivity that came through from these leaders in the sector was a breath of fresh air, confirming for me the wisdom of Spoonfed pivoting last year in order to accelerate the development of particular digital solutions to meet the real issues that are now being faced.