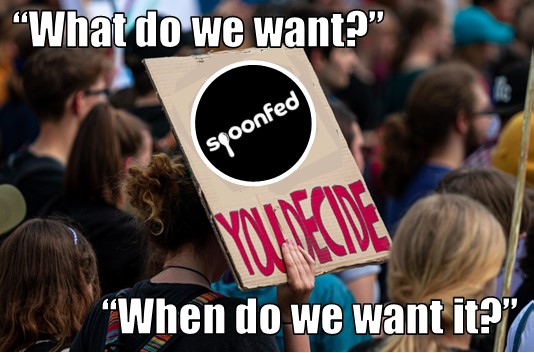 It’s one of the most common chants to be heard at any public protest worth its salt. (In fact, I would protest if it wasn’t used.) A call and response to arouse the agitators and to make themselves loud and clear: What do we want? (Fill in the blank?) When do we want it? Now!

It’s a relatively simple 4 part process with minimal prep required – unless of course the answer to the question of what they want is ‘More Procrastination’. At that point the answer to the second question can throw things into chaos! Anyway…

Being able to change things to the way you want them is a powerful tool.

Let’s have a quick look at some typical scenarios in the hospitality sector:

Being flexible with catering is key during this time of flux. Which menus are available and when? Using Spoonfed, the caterer has full access to the back office. Changing prices, updating allergen details, adding and editing new menus – whenever and however. That’s a win for you and your customers.

Now, not every catering software will allow that sort of access, but we feel it’s vital for you to be in complete control to allow you to be creative and clever with your menu offerings and to keep your customers up to speed too.

Find out more about the control you can have over what you offer on line and how to drive sales – ask for a demo of the Spoonfed ‘back office’.